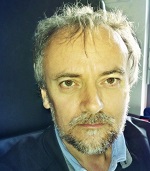 Franck Davoine received the Ph.D. degree from Grenoble INP, France, in 1995. He was appointed Associate Professor at the Université de technologie de Compiègne (UTC), Heudiasyc Laboratory, Compiègne, France, in 1997, and Researcher at CNRS, Compiègne, in 2002. From 2007 to 2014, he was on leave at the Sino European LIAMA Laboratory, Beijing, China, as PI of a project with CNRS and Peking University on multisensor-based perception and reasoning for intelligent vehicles. Since 2015, he is back at UTC, Heudiasyc, working on collaborative vehicle perception and urban scene understanding within the Laboratory of Excellence MS2T on systems of systems.